WELCOME TO THE ALL PIRATES REVUE!

Click on the year's program icon to see the full program. These are courtesy of Diane McMahon, and her reflections on the productions are below. 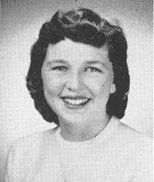 By 4pm every afternoon there would be kids on the stage and Bill Moeller sitting at his organ in the orchestra pit. Marilyn Culton would be marking off stage places, Mrs. Blakely would be sewing costumes and everything would be total chaos. Gradually, day by day, the music, singing, dancing, costumes all came together for the yearly musical review called "The All Pirate's Review". Bill Moeller had a gift for taking kids with no outward talent and having them singing, dancing, working in the wings building scenery, and generally keeping busy with some project including make up.. After weeks of practice the "show" would come together and the house would be sold out. Highline High School Students with the encouragement from Bill and crew would put on a wonderful, musical variety show and entertain the community of Burien. Many wonderful stories came out of the make-out, er, make-up room under the stage.

In 1954 the show started with "Another opening, another show". Can't you hear the tune as you just say the words? I will remember the scene where the girls were dressed to represent each month plus one. Remember Jerry Bayne and his fantastic trumpet playing? Or how about Punky Esping playing the part of the Grandma in the Gay Nineties Revue? Dick Dahlgard was everywhere, taking pictures, and still is today. One scene I played in with two other violinists, Pat Flippo and Gloria Spoklie. We played Clair d'Lune while standing on this pillar in a very tight, straight dress. I remember a soloist tell Bill if some yelled FIRE - "I'd burn", in this really sultry voice. Another time the "Starlighters quartette" was performing and one of the guys stepped off the stage right into the pit orchestra. How about the Mardi Gras scene where everyone was in black face singing "Alabamy Bound"?

In 1955 the name of our variety show changed to "A Toast From Coast To Coast". The show traveled from Hollywood to the South and from down home country to New York. How well I remember the milking maids and Pat summers singing "Pretty Girl Milking Her Cow". Then the show moved to New York and the fun began! " New York, New York" was huge production number and involved nearly all the cast. It was really interesting sitting in the pit orchestra rehearsal after rehearsal watching the development of the scenes take place. From start to finish Bill had this uncanny way of thinking that brought everything and everyone together for a finished product that was outstanding.

"Happy Holidays" 1956 - our big year -Seems like this show had a lot more solo acts than other years, maybe we had a lot of good talent in our class?
Starting in January and ending up in December, the show hit many highs featuring the Hi Tones, Graham McDade singing "You're a Grand Old Flag", Judy Coulter singing" Beyond The Blue Horizon" and Ray Gambill on the accord ian playing "Jalousie". Dave Randall and I danced a special number and how well I remember trying to learn the lifts and spins we were to do. I would gladly sit in the pit orchestra as opposed to being on the stage any time. How do you glide across the stage as if on ice skates ? Ask the members of the dance ensemble. And of course - the finale: "That's All Now For The Pirates' Revue".

Years later I received a phone call from Bill Moeller saying he needed a fiddler for a scene the summer stock was working on. I was only too glad to sit in the pit once again with Bill, turn his pages and hand him a Kleenex when he got weepy. Only this time 'round the performers were his own children singing and dancing and the dance ensemble was performers from their high school days. What a reunion we had!!