Classmates on the Web

Links to classmates sites, or sites providing information about classmates.

From Profile of The Honorable Darryl Johnson: Prior to his position as Acting Ambassador of the United States to the Philippines, Darryl N. Johnson was sworn in as American Ambassador to the Kingdom of Thailand on December 7, 2001. He took up his post in late December and presented his credentials to King Bhumibol Adulyadej on March 29, 2002. His previous assignment was as Deputy Assistant Secretary of State for East Asian and Pacific Affairs, responsible for China and Mongolia. Before joining the Foreign Service in 1965, Ambassador Johnson served as a Peace Corps Volunteer in Thailand, teaching English in Lamphun Province. His first Foreign Service assignment was to the U.S. Consulate General in Mumbai, India, after which he undertook Chinese language training, followed by assignment to the Consulate General in Hong Kong (1969-73). His other overseas postings have included Moscow (1974-77), Beijing (1984-87) and Warsaw (1988-91). He served as the first U.S. Ambassador to the Republic of 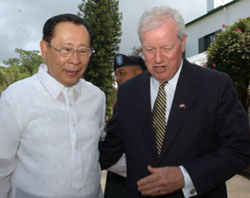 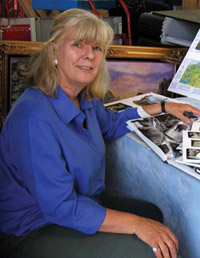 Sigrid Arntson Mecklenburg Bio from the Moorpark Mammoth website. Sigrid Jan Mecklenburg enjoys the challenge of mixing disciplines to create prehistoric animals. With this enthusiasm, she stopped her work on painting dinosaurs of the Far West to study, draw, and paint the newly discovered Mammoth found in Moorpark, CA. Jan was excited by the news coverage of the unusual beast but surprised by the few artists' rend 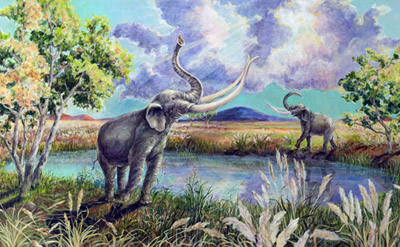 erings available. She turned to Paleontologist Mark Roeder; George T. Jefferson, noted author and museum director; and Dr. George McDaniel, recognized expert on mammoths. With the knowledge and assistance of these three experts, Jan was able to create the beautiful rendering you see today (shown right).

Jan moved to California from Seattle in 1989, where she spent 7 years in commercial design drawing figures and home furnishings. She has written and sold seven children's books and is a certified grade school teacher. She has taught art classes for children and on Educational TV. While earning her degree from U. of W. , Jan was given her first professional art show award by the governor of Washington State. She loves the out doors, hiking, and home fix-up projects.

Excerpt Ventura County Star The longtime book illustrator, who recently began focusing on prehistoric animals, read more than two dozen books on elephants, traveled south to the Anza-Borrego Desert to talk with experts, and consulted with Mark Roeder, the paleontologist who oversaw the dig as the remains were pulled from 60 feet below ground, carefully wrapped in plaster and burlap and transported to his lab in Santa Ana. Mecklenburg also follows the work of those cleaning away the dirt hiding the details she needs so desperately.

Moorpark Acorn -mammoth oil painting by S. Jan Mecklenburg, selected to create the painting because she is renowned for prehistoric art. 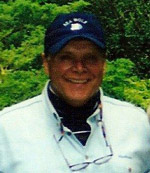 Gordy Ringoen, as guest commentator on PrudentBear.com, "Inflation and deflation, as defined, are merely symptoms of the real problem. The real threat to our economy is financial inflation and financial deflation. These are not the price of goods and services but rather they are a monetary and credit phenomenon. Financial inflation is the expansion of money and the extension of credit at a faster rate than economic growth." On RisingGlobalWarming "I finished your book and enjoyed it. It is too bad people don’t realize what a delicate balance a working society is and that it can be so easily destroyed. If they did, they would be much more mindful about the world around them.” — Gordon W. Ringoen, Business Executive, Instructor in Economics, University of Washington. 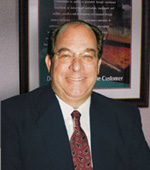 Dave Moore - [Adopted from bio on his company web site.] Dave Moore is one of the founders and is CEO of Corinthian Colleges, Inc. Immediately prior to founding Corinthian, he was President of a subsidiary of National Education Centers, Inc. (NEC). From 1992 to 1994, he served as President of DeVry Institute of Technology in Los Angeles, where he developed DeVry's West Coast growth strategy. From 1980 to 1992, he was employed by Mott Community College in Flint, Michigan, where he was President from 1984 to 1992, Dean, Management from 1982 to 1984 and Dean, Management Information Systems from 1980 to 1982. From 1960 to 1980, Mr. Moore served a distinguished career in the U. S. Army, retiring at the rank of Colonel. 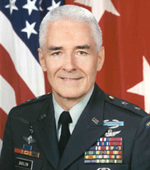 Greg Barlow retired in 1999 as Adjutant General, commanding the Washington Army and Air National Guard which has a combined strength of more than 8,000 soldiers and airmen. [from the official web site: The General’s military career began on July 31, 1964 when he was commissioned as a second lieutenant through the Reserve Officer Training Corps (ROTC). He entered into active duty on March 27, 1966. He served in Vietnam from June 1967 to December 1968 as a Special Forces aviation officer, completing more than 1,000 combat flight hours. Prior to his current appointment, Major General Barlow served as the Commander, 81st Infantry Brigade (Mechanized) which was round out to the 9th Infantry Division, Fort Lewis, Washington. From another site: MG Barlow's current civic affiliations include the Medina Foundation, executive director; Boy Scouts of America, Chief Seattle Council, advisory committee member.... 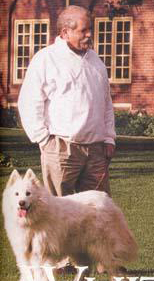 Craig Gunsul - Recipient of the 2001 Faculty Award for Service to Alumni, Craig Gunsul has taught, mentored, and advised many generations of students during his 32 years on the Whitman faculty. Besides teaching physics, he put together the first environmental studies program here, has been involved in the first-year core program since its inception, and sponsors the one-act-play competition. Witman College Magazine On Line.--- Student Comment: Without question my favorite prof I have ever had. He is retiring I believe, but a fantastic, fantastic old man. Has the spirit of someone forty years his minor, and a seemingly undying love for imparting knowledge upon young people. This man will be missed in this community, and if you do not know him, try to. He is that cool. Another Student: Awesome guy, very intellectual...knows how/when to promote discussion, and when it's a good idea to sit back and let the discussion go of its own accord.
At the right is a picture of Craig, with Moby, from his web site. He obviously believes, as I do (see below) that we look better with our dogs. 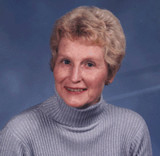 Nancy Carson - Author of Believing In Ourselves: A Celebration of Women. Nancy Carson is a freelance writer specializing in memoirs and the personal essay. She is a frequent contributor to Take Care!, a publication of the National Family Caregivers Association, and lives in Alexandria, Va. Book Review. Edutopia link. Click on her picture for link to her web site. 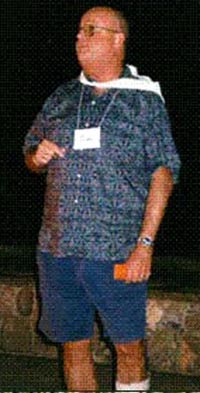 Punky Esping - Parenting with Dignity Here are some of our key sources: Alden Esping - He was the YMCA youth group leader in our hometown of Ellensburg Washington while I was growing up. He went on to teach in Anaheim California where he was selected High School Activities Director of the year in 1996. He was the first person to expose me to the fact that I could challenge myself to higher performance via goals and personal challenges. He has remained an advisor ever since sixth grade. I put so much faith in Alden because he was using his skills daily to improve life for kids in his school.

Alden Esping, national winner of the Warren Shull Adviser of the Year Award in 1996, offers a simple, but extremely effective suggestion: "As adviser, I always made a special attempt to greet all students-ALL-and to get some eye contact, a smile, or a twitch. I kept at it, even though there was no response. Generally, I finally got a response. The adviser should be out and about and let ALL kids know that he or she cares about their concerns, frustrations, problems, likes, and dislikes." (Alden Esping, email: esping@ix.netcom.com)

k Nord (from company website) Nord Northwest Corporation is one of the premier development companies in the Pacific Northwest and is actively involved in establishing quality communities for living in the greater Puget Sound region. Founded in 1965, Nord Northwest Corporation began serving the Puget Sound housing market by building high quality homes for discriminating buyers. Staffed with highly qualified designers, marketing and construction professionals, we have expanded our operations to include land acquisition, development, and construction projects. Nord Northwest Corporation is an environmentally sensitive company with strong community ties in the Skagit Valley area, where most of our employees reside.

Dick is shown with the company welcome committee, Snickers, right. . 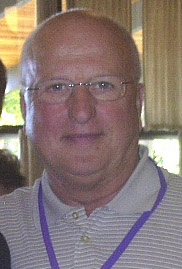 Dick Blomberg. "I think the economy in 2004 was extremely good in this area," continues Dick Blomberg, senior vice president and manager of Whidbey Island Bank's Burlington branch. "I don't know if it can improve in 2005. It will remain good, but I don't think it will be as good as 2004." 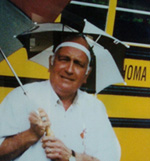 Gary Morgan - Maple Valley’s Most Famous Cougar.[Following is from the Voice of the Valley newspaper]: Gary Morgan … returned to Cedar River Middle School to accept the praise and adulation of friends, colleagues and admirers who turned out to honor the former Tahoma School District principal. Morgan retired in 2000 but suffered a severe stroke in the spring of 2002 that left him partially paralyzed and unable to speak. But his spirits were high last Wednesday, as more than 100 well-wishers filled the school's Multipurpose Room to offer thanks and encouragement to Morgan, who devoted most of his life to educating and helping young people during a 40-year school career.

The picture at left is from a portrait that hangs in his honor at his school, photo by Georgina. 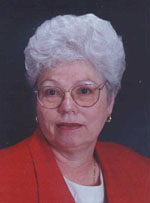 Shirley Vanasse Flaherty has a real estate business web site. SheI was licensed as a Realtor in Colorado in 1981 and specialized in working with bank-owned properties (REO). In 1993 when she moved back to the Puget Sound area, and affiliated with a real estate office in Federal Way which was owned by Jerry Jackson (class of 55) and has been there ever since. She specializes in working with banks and marketing their foreclosed properties (REO).

Kay Rehnstrom Aya. Student in Borgeson Studio Online Drawing Course -"This to me was the most valuable part of the course...actually seeing how to enhance, change the images was extremely helpful. Thanks for designing this workshop format--it's become a daily part of my life!" KAY AYA Seaside, Oregon 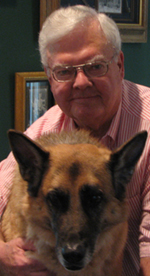 Charles Cooper. The link is to my site on managing the life insurance company, a rather boring lengthy piece unless you are into that sort of thing, in which case iit is only lengthy. A shorter bio is on the Life Office Management Assn site, linked from the picture on the right.

On more general topics is my blog by the Way. It is my sardonic take on the world as it goes by. The good looking guy is Bear, who is 11, or 77 in dog years. Have you ever noticed how well dogs retain their looks? Must be the fur.

Ferd Nist is still active in his family company. From the Seattle-Tacoma Box Company Website: We are a 114-year-old family owned and operated company specializing in packaging. ...Fourth Generation- Ferdinand Nist Jr:
Involved in all phases of sales and production. His development of oil technology packaging led the company to international status 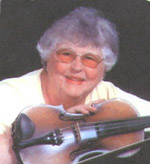 Diane McMahon has her own web site. She has several music CDs available. Excerpt from newspaper article on her site. 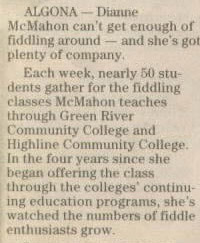 John H. Wiltse Jr. [From King County Local Voters Pamphet - My wife and I moved to Normandy Park 43 years ago. We bought our first house here, raised our children here, and retired here because of the lifestyle and unique character of Normandy Park. We have a financial and emotional investment in the City.

If I am elected to retain my Council position, I am committed to the following objectives: 1) Maintain the fiscal integrity of the City. 2) Retain the single-family residential character of Normandy Park. 3) Encourage appropriate commercial/mixed use development. 4) Maintain high standards of services and programs for residents of the City, and 5) Work cooperatively with City Staff and other Council members. After five years on the Planning Commission and nine years on the City Council I have the experience and commitment to achieve these objectives, but need your support. Please vote to retain John Wiltse for Normandy Park City Council, Position Six.
Phone: 206-242-4043
E-mail: johnwiltsejr@hotmail.com